The Face Of Florida: Hollywood by the Sea Is On The Verge Of A Housing Revolution

Hollywood is the next big thing in Florida real estate. 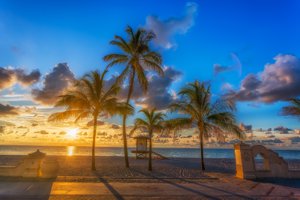 Founded in 1925, the city continued to silently climb up the rank in terms of popularity and magnitude. It is the twelfth largest city in Florida, and it's now on its way to becoming even larger.

The primary reason for Hollywood's recent growth is the explosive real estate market in that area. This growth can be seen in two ways:

As years will pass by, the real estate growth in the city will continue to branch out of the larger trends and follow its own path.

In some ways, it has already begun.

So why didn't it happen sooner? The reason is simple. Hollywood's fate has always been connected to the two cities between which it lies - Fort Lauderdale and , of course, Miami. Over the years, these cities have claimed the lion's share of the housing market, but that's going to change.

People who don't want to spend more on a worthless location in a noisy Miami environment continue to flock to Hollywood for better pricing, affordable housing, and more importantly, peace of mind. Hollywood is the future.

Then there is the beach.

The beach is the heart and soul of Florida. It's also this city's identity - always has been, always will be. That's why it's the other Hollywood, and its pride is the award-winning Blue Wave beach.

The Hollywood Broadwalk is an American icon. Considered to be one of the top 10 nostalgic promenades, it's perfect for long walks or a run along the beach as the sun rises in the background. Surrounded by shops, hotels, restaurants, and clubs, it is the perfect microcosm of the Hollywood lifestyle.

However, when we look past beyond the romanticism associated with Hollywood beaches, we see that this city has a much more practical value - the real estate value.

As tourists continue to pour in, captivated by the blue waves and breathtaking sunrises, a network of hotels continues to emerge. A prime example of this is Margaritaville's Hollywood Beach Resort. Sprawled out on a six-acre stretch of land and occupying 450 acres of the beach front, it is the next big thing.

The interest n Hollywood as the place to be is not just superficial. The excitement continues to seep into the housing market. Hollywood is witnessing a stunning growth in condos, buildings, and single-family residences as more and more people continue to buy, sell, and rent housing units.

With more then 4,900 condo units in the plans, the Hollywood-Hallandale Beach market is second only to Miami. One of the prominent examples includes the Oceanbleau tower. Set to open next year, it has 48 units starting at $1.6 million. Projects such as these are changing the landscape of the condo market.

The housing market in general, however, shows positive signs of growth and an enormous future potential. For instance, in just one year, the home values have increased around 13% which amounts to a whopping 46.1% increase over the past five years.

With housing demands skyrocketing, Hollywood is the perfect place to be!