Dania Beach is Broward County's First City.  The historic roots of the first city in Broward County date back to the 1880's, when much of what is now the FEC railroad line was laid through the area.  In recognition of this transportation advantage, a pioneer and developer named W.C. Valentine planned a settlement called Modello and 12 Danish Families moved from Chicago to settle there in 1898-1899.  Three years later, 30 Danes were recruited from Oconto, Wisconsin to colonize the settlement, and the first home was built by A.C. Frost, for whom a park is now named.  When the Town was incorporated in November 1904, its 35 residents, most of whom were Danes, changed the name to Dania.  By 1912, Dania was a thriving community of almost 1200 people and continued to grow through the 1920's when the city suffered tremendous setbacks.  As of the 2010 census 29,639 residents call Dania home.

The Antique Capital of The World

Dania  was big in the Tomato industry in the 20's and 30's and the Tomato industry started fading in the 40's, a new type of commerce...the antique business...arrived, when Genevieve and Willard Ely set up shop in 1945.  It took 10 years for other antique businesses to follow, but it wasn't long thereafter that Broward's first incorporated city once again gained fame, this time as the Antique Capital of the South.  Today, there are over 100 antique shops and malls vending their wares along a few short blocks of Federal Hwy in Downtown Dania Beach. 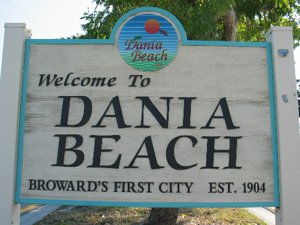